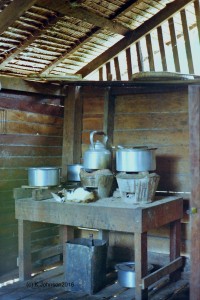 They say that an army marches on its stomach. Well, most travelers follow their taste buds, and I was no exception. Many countries take pride in their cuisine, and I’ve been known to pause my travels just because of it. Falafel in Egypt, Dim Sum in Taiwan, and fresh seafood on the Australian bar-b. With its delicate sauces and abundant chocolate France is rightfully high on the list as well, but for me, the absolute top had to be Thailand. Fresh, inexpensive, filling food could be found almost everywhere. Crunchy vegetables, thirst-quenching fruit, slippery noodles, searing chilies and rich, coconut curries. My mouth waters just thinking about it. The food was delicate and balanced—the flavours reigning supreme in even the spiciest of dishes. Best of all, great food could be found in the night markets or at street stalls, where nothing was hidden and the whole meal was made in an open kitchen smaller than the average Canadian dinner table.

In the Karen villages and camps, the menu was somewhat more limited, but the creativity no less remarkable. Karen people are hospitable to a fault. “Have you eaten?” was often the initial question when I entered a household. This could cause some real discomfort. It’s difficult, as a fat Westerner, to accept food from people who have so little, no matter how earnestly offered.

New mothers would receive extra beans, and an egg, each week, but mostly people were left to what they could scrounge, or what they could grow. Every village household had a garden, but in the camps, although people might keep chickens or pigs, they were rarely able to grow vegetables. We always brought in a little extra food when we could. Leafy greens or root veg were easy, as they could be kept for the week, but there was no food refrigeration, so if we brought meat, it had to be tinned, or alive. Chicken and fish were the usual staples, but bush meat also made an appearance, especially if we were in the displaced villages of Burma. I drew the line at eating monkey or fried cicadas, but have knowingly eaten cobra, frog, turtle, and boa constrictor. The list is sure to be longer, but most of the time it was just easier not to ask what was in the pot. 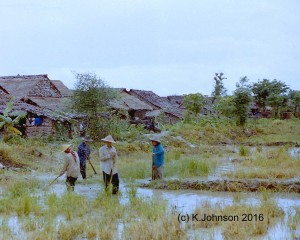 Working in the rice paddy next to the camp

As Kelley discovers in the novel, what we ate the most, by far, was rice. The region grows tons of rice. The highest quality, as usual, is marked for export. Each grain at that level is perfect, the batches inspected for stones and random hulls. It cooks up light, and fluffy, and fragrant. The next grade down is a little rougher, with a few broken grains and some hulls included. It was what we found in the local markets and shops. What we ate in the camps was the lowest grade, 75% of which was broken rice. Each morning the cook would get the coals glowing in a ceramic brazier, and make a giant batch—enough to feed all the hospital staff and us farang (white Westerners), for both lunch and dinner. After giving it a good cleaning and inspecting it for stones, she would scoop the raw rice into a broad, shallow pot with just the right amount of water. The rice would steam and soften, its starchy outer layers gradually binding together, until a thick rice cake was created. When it came time to eat, a slice would be cut for each bowl and a dollop or two of saucy meat or vegetable would be added to the side. Rice would be gathered together into a ball and dipped into the sauce. Eating this way made it possible to feed more people with only a small amount of expensive meat. Fish paste always accompanied rice and was an acquired taste, to say the least. Made from fermented sun-dried fish, ground with salt and chilies, the smell of it bit your nose. You only needed a little to add potent flavour to your meal. Sadly, in many households, during too many meals, it was rice’s only accompaniment.

Considering what little they had to work with, and the utensils available, the cooks did an amazing job. If we lost weight, it had little to do with the plates that were placed in front of us. The memory of it gives me pause when, standing in front of my full pantry, I catch myself daring to think, “There’s nothing to eat.”