Welcome to my blog!

My novel Trusting Bamboo Bridges is coming out any minute now and it’s a very exciting and busy time, as you can imagine. In the run up to print, I was hunting around for cover photos, and that got me thinking. I use many of my old photos to inspire me as I write, why not share them with my readers? A little peek into the background of the story, as it were. So that’s what this blog will be (or at least, for the time being).

With that in mind … perhaps, a little more background about your faithful author is in order. 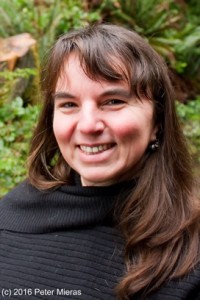 The first time I was in Asia, I was advised to print “intro cards”. Business cards, if you like, to be presented to anyone you were meeting for the first time. They helped to establish your level within the social hierarchy. I was told that my card must include my profession. I pondered and fretted a great deal over that small detail. As you are probably aware, I was trained as a laboratory technologist, but at the time I had been backpacking for over a year and a half, and traveling for over three, and felt a bit of an imposter. I finally reconciled myself to a baby-blue card, lightly perfumed, with this title:

My wanderings have not taken me everywhere, but they have taken me a lot of places. One of the most memorable being Zaire (now the Democratic Republic of Congo). It was 1994, the Rwandan crisis had reached its peak and was beginning to settle, and I was tracking mountain gorilla. To reach the mountain park, I had to walk through a U.N. refugee camp. Let me tell you, that camp fascinated me. Bent wood huts, covered in blue and white U.N. tarps. It had become a small village, with one hut even converted into a local pub. These people, with nothing, had already begun to try to “normalize” their lives. The image stuck in my head and from that moment I was hooked on the idea of doing something.

Everywhere I went in Africa I saw aid organization vehicles: “U.N.”, “Unicef”, “Red Cross”, and “MSF”, Médecins sans Frontières/Doctors without Borders. When I got back to Nairobi, I began to look into these organizations and got to thinking about volunteering. I went to the Red Cross but they only took people with third-world work experience. That made no sense to me at the time—it makes total sense now. The U.N. people seemed genuinely interested, then handed me an application form so thick I could barely lift it. I had a foreboding sense of things to come, got frustrated, and gave up. I went on my merry travelling way, but never could quite get those refugees out of my head.

When I finally got to Europe, the vision of blue tarps still haunted me, so I walked into the head office of MSF Holland and demanded they take me on. They gave me a quizzical look but after a short review of my work resumé, and a bit of a chat about my travels (much of them solo), they said “Okay.” There was no looking back.

I ended up working with MSF for 8 years, but my very first mission was to Thailand, along the Burmese border. My objective was to oversee 12 laboratories. Ensure they ran smoothly, supervise the national (local) staff running the labs, and train new staff as required. This would have been completely simple if all of those labs had been in one place, but no such luck. Four were in established Karen refugee camps in Thailand, four were in Karen held areas of Burma; and four were in the Mon-held area of Burma. These 12 labs stretched a north-south border distance of over 1000 kms.

I did a lot of travelling.

The number of labs fluctuated over my time in the region, depending on people movement, new refugee displacement, and MSF’s ability to find a second lab supervisor. While Trusting Bamboo Bridges takes place squarely within the Karen territories, many of the memories I’ve drawn from took place in the Mon region. Their struggles were similar, the people as wonderful. 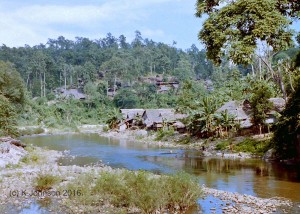 The photo above is an idyllic scene: people bathing in a sluggish river, woven bamboo houses tucked into the edges of the jungle. The reality of this scene is that it was part of a refugee camp. One of “the most beautiful refugee camps in the world.” I’ve been asked why there are no walls to keep the people from fleeing further into Thailand. It’s because this one was a hot, dusty, 2 1/2 hour drive away from Mae Sod (the nearest town), on a rarely traveled road. It was for this reason that we had a house in the camp. The idea of driving in on Monday and out on Friday in order to avoid wasted time and resources was great, in theory. It was the first time I’d seen a real bomb shelter. It was shut down long ago, 1997 I think. Unfortunately, as the camp was built right along the border, and so far from the public eye, it became a routine target for the Burmese military, SLORC (I didn’t embellish that acronym for the novel). The six-thousand-odd people were shifted to other camps, or encouraged to return “home”. My character Naw ku came from this camp.

I never got to sleep a single night there.